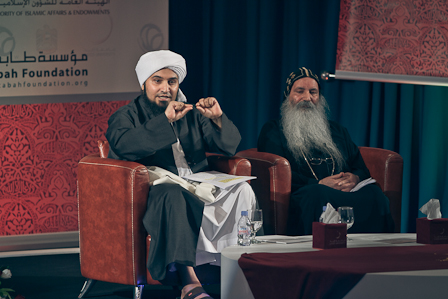 Proceedings began with an introduction by H.E. Sheikh Nahyan who emphasized the importance of the event in the aftermath of the tragic incident in Alexandria on Christmas eve. He said the event was to honor and recall the long history of love and affection which governed Muslim-Coptic Christian relations in Egypt, and that Arab Christians are brothers for Muslims and that all should stand together in forging a common future as one people without discrimination. He also stated that while religion is for God, the land is for all, and that such principles were expressed through more than 14 centuries of respect and appreciation for the people of the Book.

He stated that the event is a sincere expression of commitment to work together for a brighter future within the same country that is rooted in the Abrahamic heritage, regardless of differing beliefs, and that diversity should be seen as an enrichment to people’s lives. He ended by talking about the principles of co-existence and toleration that were embodied by the late Sheikh Zayed (may God have mercy on his soul) and the United Arab Emirates under H. H. Sheikh Khalifa bin Zayed Al Nahyan.

Pastor Ishaq began his word by saying that the Holy Books were not sent for the misfortune of people, but to enlighten humanity and help them attain felicity in this life and the hereafter. He added that there were many things in common between Muslims and Coptic-Christians, and that both lived together through 15 centuries of love and affection, standing as an example of toleration in the Middle East. Pastor Ishaq followed with an insight into the history of the Muslim-Coptic Christian relationship in Egypt; how both communities stood together against foreign invasions and how Coptic Christians refused to migrate after being given the offer from abroad. He gave examples of the loyalty displayed by Coptic Christians from the time the Muslims first arrived in Egypt up until the present age, and how that set up the foundations of brotherhood between the two communities.

Pastor Ishaq emphasised that bonds of brotherhood, cooperation and mutual respect must be strengthened more today than any other time before, and concluded by expressing his best wishes of stability and prosperity for the government and people of the UAE.

The final word of the evening was delivered by Al Habib Ali al-Jifri. He praised Pastor Ishaq’s sincerity in participating in the symposium and selecting the title “15 Centuries of Love and Affection,” and called for a more balanced understanding of how religion is applied to society despite there being theological differences between religions, and that these differences are not meant to be points of divergence and conflict, but rather a proof in and of themselves that religion can foster ties of mutual respect and love despite their presence.

Through the Quran and sayings of the Prophet Muhammad, upon him be peace, Al Habib Ali explained the strong link between Muslims and Christians, emphatically stating that this link prohibits the causing of any harm to them, and whoever kills one of them, shall never smell the fragrance of Paradise. He mentioned the counsel of the Prophet, upon him be peace, to his followers to protect the people of Egypt against any harm and to treat them well. He further illustrated through narrating historical events, evidence of the strong link between the two communities, adding that it was demonstrated in our time when both communities stood together as one after the tragic events at the Alexandria Church.

He continued with a story of how Sheikh Ibrahim al-Bajuri, an erudite scholar and head of the Al-Azhar University in his time, refused to issue a fatwa for the ruler, Abbas Hilmi, to expel Coptic Christians from Egypt to the Sudan, saying to him that they are rightful citizens of the land, and causing them the slightest harm is categorically forbidden for God has placed them under the protection of the sharia until the end of time. He used this to mention how institutions like Al-Azhar need to reclaim their historical role as the conscience of religion in Egypt, and that history testifies to the balance which permeated society when they were so, as exemplified in Sheikh Ibrahim al-Bajuri. Al Habib Ali also praised the efforts of the Sheikh of Al-Azhar, Dr Ahmad Tayyab, the Grand Mufti of Egypt, Dr Ali Gomaa and the Minister of Religious Affairs & Endowments for their strong condemnation of the Alexandria incident.

He concluded by stating that both Christians and Muslims should assume responsibility in unequivocally standing against extremism that arises from both sides. Finally, he expressed the need to implement the “A Common Word” interfaith initiative, which was a success in the West, to the service of interfaith dialogue in the Middle East.

A discussion and question and answer session followed, with participants including Dr. Zainab Ridwan, parliament speaker for the Assembly of Egypt, who passed on a message from the President of the Assembly, Dr. Fathi Surour, with a report on the Alexandria incident and Dr. Nour Hayati al-Saqqaf, vice-president of the Indonesian Parliament who expressed her happiness attending such an event.

Our latest releases: Introductory Video about Tabah
Scroll to top