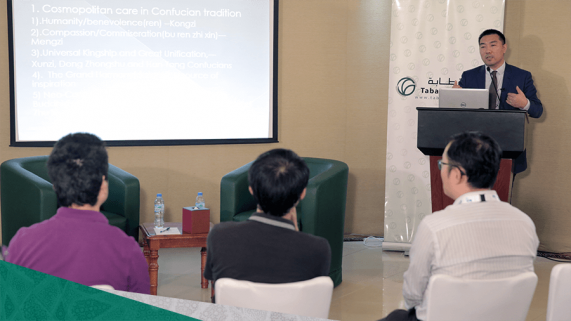 This week, Tabah Foundation welcomed Dr. Shaojin Chai, a senior researcher at the Ministry of Culture in the UAE and former lecturer in Zayed University and American University of Sharjah, to give two lectures on examining the native cultural models of East Asia and the challenges faced by East Asian nations in retaining their cultural identities and indigenous values throughout modernization.

During the 20th century China experienced both the Communist and Cultural Revolutions, which sought to replace any aspect of the “old culture”, including the framework of Confucianism, with modern ideologies. After these spiritual aspects of the old world were eradicated, the competing forces of communism, nationalism, capitalism, and individualism would take precedent. Many Chinese revolutionaries believed that this was the only way to achieve modernity and that the old concepts of spirituality would be long forgotten as a result.

However, Dr. Shaojin argued that there has been a revival in traditional Confucian values in East Asia despite the attempts to remove native religious and spiritual thought. In Japan, the third largest economy in the world, the economy flourished as it incorporated traditional values in the business world. Despite Western influences, South Korea became a mixed economy as it saw the need to maintain the welfare of its people. The desire to retain traditional values can be found in Korean dramas which espouse care for the family unit and relatives.

Even China, despite having much of its religious traditions suppressed, has started to see its own revival. In rural China, self-governance and local rule has been permitted in stark contrast to governing principles in the official state ideology. Recent studies have emerged on the effect of traditional values within villages, showing that villages which preserved religious values contained less corruption. In cities, developments have emerged to find that the population is turning more towards religion and spirituality. According to Dr. Shaojin, “though the western models of secularization attempted to replace the spiritual void with material wellbeing, the people of China still longed for spiritual wellbeing”.

“Any culture that wants to progress must first understand its own culture.”
While models are not perfect in every context, the Arab world can use the example of the East to be mindful of self-development. Identity must be retained with progress, whether that is found in language or religion.

This lecture was presented as part of the Futures Initiative at Tabah Foundation.

Tolerance & Coexistence in the 21st Century from Abu Dhabi

Tabah‘s Futures Initiative Releases a Landmark Report on the Attitudes of...
Scroll to top