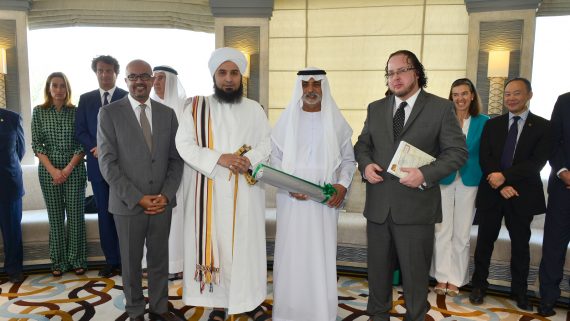 The Tabah Foundation in cooperation with the Canadian Embassy in the UAE, and under the auspices of His Excellency Sheikh Nahyan bin Mubarak Al Nahyan Minister of Culture, Youth and Community Development, organized a nighttime symposium replete with a diverse multitude of attendees on Tuesday March 10th, 2015 at the InterContinental Hotel Abu Dhabi’s Auditorium. The event’s keynote speaker was Dr. John Andrew Morrow—a Canadian scholar who lectures at Ivy Tech Community College, USA—joined by prominent guests including Sheikh Ahmad Al Kubaisi, Sheikh Ahmad Abdul Aziz Al Haddad, Canadian Ambassador in Abu Dhabi Arif Lalani, and Chairman of the Tabah Foundation Habib Ali Al Jifri, alongside a select elite of diplomats and social dignitaries.

The evening was kick-started by a tour of an exhibition showcasing a collection of photocopied documents and manuscripts discovered by Dr. Morrow in his critically acclaimed study on “The Covenants of the Prophet Muhammad with the Christians of the World.” In his speech, Morrow referred to the Prophet Muhammad (peace be upon him)’s treaties with the Jews and Christians since the very beginnings of Islam, and mentioned that these covenants continued to be honored during the reign of the Four Rightly-Guided Caliphs, and through the Umayyad and Abbasid Caliphates, all the way to down the Ottoman Empire. He pointed out that records of these covenants were not only found in Islamic sources but also detected in other sources, such as Christian-Arab sources and translated into a number of languages including Latin, Ancient Greek, Assyrian, and Persian. Dr. Morrow further indicated that the Prophet Muhammad (pbuh)’s covenants with the Christians of Najran and Persia, as well as Assyrian and Orthodox Christians, Egyptian Copts, and Abyssinian Christians, invariably underpin the values of tolerance, equality and peaceful coexistence amongst all, in an unprecedented and advanced move for an era marked by intolerance of pluralism.

The Chairman of the Tabah Foundation—Habib Ali Al Jifri—then commented on Morrow’s speech, saying: “We are today at a momentous turning point in Muslim history, in light of the presence of those who ascribe the crimes and perversities committed to the Holy Quran and the Sunnah of the Prophet (pbuh); such a correspondence is forbidden and unacceptable, since there is no such thing as a moderate or an extremist Islam, rather, there are moderate Muslims and extremist Muslims.” After that, Sheikh Ahmad Al Kubaisi and Ambassador Arif Lalani each delivered separate short speeches. Subsequently, tweeters interacted with the event on social media networking site Twitter using the hashtag #المعاهدات_النبوية for Arabic speakers and #CovenantsUAE for English speakers.

Furthermore, the Tabah Foundation held a number of specialized debate circles for the purpose of engaging specialists among the attendants in the discussion on par with roundtable debates on the one hand, with its guest Dr. John Morrow on the same topic. A roundtable was held for scholars and researchers, another for Arab diplomats, and a third for non-Arab speaking diplomats, besides a meeting with Arab academics and clerisy. The event also included two televised programs on Wednesday evening: one on Sky News Arabia hosting Dr. Morrow and Habib Ali Al Jifri, and an interview with Morrow on Al Arabiya Channel. Dr. Morrow and Habib Al Jifri then paid a visit to Sheikh Nahyan bin Mubarak Al Nahyan, where the former presented the UAE Minister with a copy of one of the prophetic covenants as a souvenir.

The Tabah Foundation has been keen on organizing these wide-ranging activities and events springing from its mission to “Re-enabling Islamic discourse to recover its ability to understand the real world context” and to propagate an international message highlighting that tolerance, coexistence, and respect of different faiths, human beings, and non-Muslim communities in the region is a genuine call launched since the days of the Prophet Muhammad (pbuh), and to clarify that what we are witnessing today in terms of murder and slaughtering of Muslims and non-Muslims alike amounts to a disfigurement of the commands of the Prophet (pbuh) and a deviation there-from.

Taabah Foundation Senior Fellow presents at the Program on Medicine and Rel...

Lessons from East Asia – Should the Arab World Turn East?
Scroll to top